I’m writing from York Harbor, Maine, in March 2020.  Regular followers might recall that we were here in August 2019 for a delightful wedding of my godson, the oldest child of dear college friends Jeff and Katie, with whom we’ve stayed close for almost forty years. 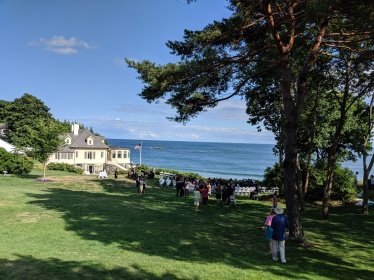 This was the last weekend before our sabbatical adventure began, a year in England, starting in London and moving on for a semester at Harlaxton from January to April, followed by a few more weeks of travel before returning to the US.  Our house, in fact, is rented through the end of June 2020, so we were planning on spending time with family, weeks at our condo in Wilmington, NC (usually a short-term rental), and a family week in Michigan.

The wedding weekend was also the finale of Anne’s Dickensian adventure with her British Residency Permit.

A year abroad, with no plans for me to return to the US until May 2020.  But on the way to Boston from Maine, to take a flight to London, the urologist called with the biopsy results that turned the fall semester upside-down.

I’ve written several posts about that whole experience, and once I was all clear, tested again in London in December, the watchword was “onward!”  From London, 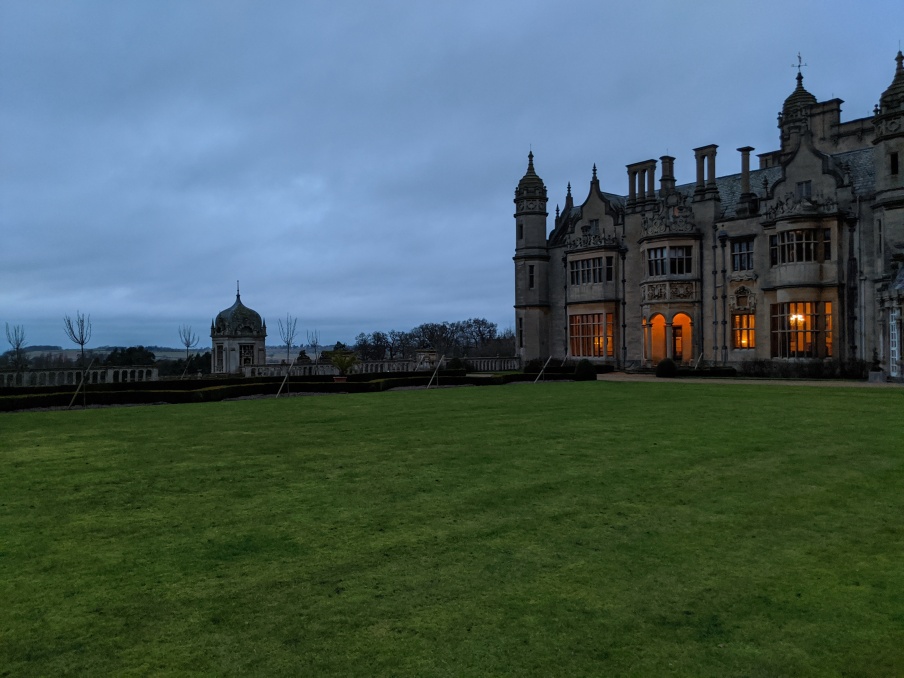 Harlaxton Manor (our room on the second floor here)

we traveled to Tenerife, for Christmas and, via Barcelona, Sicily for New Years.  And on to Harlaxton for our second full semester!

But as everyone in the world now knows, a novel Coronavirus called COVID-19 has spread from China to Europe to almost every country on our planet.  As the situation grew more dire, in a dramatic and unexpected move, the President of the University of Evansville told the students via video, gathered in the beautiful Long Gallery at 10 pm where British Studies lecture are held on Monday and Wednesday mornings, that they had one week to leave and return to their homes.  The semester was over with five weeks to go.

The Long Gallery was far from serene that night, 11 March 2020, when students were told their semester in England was over.

Our original plan was to stay at the Manor until we had to leave.  Plan B was to use our Britrail passes and go to all the out-of-way places.  Plan C was to find a cottage in a small village in the Orkneys.  But when the travel ban was extended to the UK and flights to the US began to be cancelled, we decided to change our flight and return to Detroit, where our car was with Anne’s family in Ann Arbor.

But where would we go?  Not to my mother’s, home base during October for my surgery, because she would be a high risk given her age.  We couldn’t even visit Anne’s father in his facility, closed to visitors.  Our place in Wilmington was rented (although one after another has cancelled in the last few weeks).

As we looked for options, Jeff texted me that their summer cottage in York Harbor was ours as a refuge for some time.  And we took him up on that amazing offer.  A night in a Heathrow hotel, a flight to Atlanta, then Detroit, another airport hotel, a 14 hour drive, and we slept in the same house where we slept the night before I learned I had cancer.

I wrote about bookends before returning to London from Atlanta in November, the two events that framed my prostate cancer surgery.  And I thought that was that.  But now, a different pair of bookends, prostate cancer and pandemic.  Disease would define my sabbatical year forever.

I am not the only person to be diagnosed with cancer this year, far from it of course. Two dear friends and a beloved cousin have had much more serious cancers than me this year (prostate is one of the “good” cancers, if there is such a thing).  And most of the world has had, or will soon have, normal life completely disrupted this year, from China to the Europe and now the US, and soon South America.  I don’t claim any special status here, facing two life-changing events in one academic year.  Still, disease will define my sabbatical.  We did get to do quite a bit this year, but missed over one-third of our time in England.  And our research projects, the focus of the sabbaticals, are shot to hell for now.  Prostate cancer and pandemic are the bookends.

But as I walked back from the beautiful little York Harbor beach yesterday, I realized there was a different pair of bookends here:  friendship.  Being back here thanks to the incredible thoughtfulness and kindness of Jeff and Katie, and Kate’s mom, is the true message.  Friends take care of each other.

And that will overcome any pandemic.